Cllr Nemeth represents Wish Ward on Brighton & Hove City Council and is known well for his work in the local community and at Hove Lagoon in particular. He won his seat from a sitting Labour Councillor in 2015 and increased his majority in May 2019. 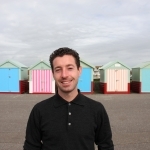