Councillor for Hove Park
Conservative Group Spokesperson on Health and Well-being
Member of the Environment, Transport and Sustainability Committee
Member of Licensing Committee

He is employed by the RICS in London as the ‘Thought Leadership Relationships Manager’ working with corporates, government and with the NGO sector on sustainability, resilience and the future of the built environment professions. He is Founding Professor of Planning & Urban Resilience at the University of Kent in Canterbury, and before that, he worked with 100 Resilient Cities – Pioneered by the Rockefeller Foundation as Associate Director with the City Relationships team where he delivered cross-cutting urban resilience strategies for Amman, Ramallah, Rome and Byblos.

Samer established the urban planning school in Brighton in the UK in 2008 with cross sector and professional body support and before that worked at the universities of Aberdeen and Strathclyde.

Samer was born in Amman, Jordan, where he completed is O-Levels at the Bishop’s School, an Anglican organisation, before moving to Hove in 1988 to sit for his A-Levels at Davies’s College on Cromwell Road where he held a King Hussein of Jordan Scholarship.

In the late 1990s, he served as the training programme and master plan coordinator with the Geneva based NGO, the Welfare Association’s Old City of Jerusalem Reviltalisation Programme. He was based in Jerusalem for two years. He returned to Jordan served as Director of Urban Studies at the National Resources Investment and Development Cooperation with responsibility for master planning former military sites. He went on to write 2 books on social sustainability in gated communities and 1 on the brownfield regeneration of former defence estates.

Samer has served as Trustee of the Town and Country Planning Association, the world’s oldest town planning charity in London, and of Resilience Brokers, a UK-based global impact movement. He had previously served as a Trustee of the Royal Town Planning Institute in London.​ 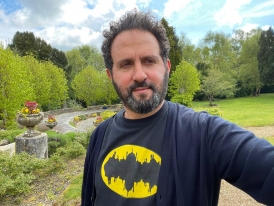